Every time severe weather moves through this area, like it did today, I think back to my childhood when I was absolutely terrified of storms. Thunderstorms are just a part of life in the South. They can be especially severe this time of year when the lingering cold air of winter collides with the warmer air of spring. When I was young, all it took to transport me emotionally to an area just this side of hysteria was a darkening sky and the rumble of thunder.

It didn’t help that we didn’t have a basement or any sort of area in which to shelter from storms. (I was an adult before I learned that basements are common in other areas of the country. Around here, they’re the exception, not the norm.) My “safe place” was a quilt. When the weather got bad, I’d go to my room and wrap myself in an ancient quilt; it gave me sense of security. True, that threadbare quilt wouldn’t have provided any protection from flying debris but much like swaddling can comfort a cranky infant, being wrapped in its embrace soothed me. I grew up in an un-air-conditioned house and I can remember being wrapped in that quilt, literally dripping with sweat, waiting for the latest storm to pass by. 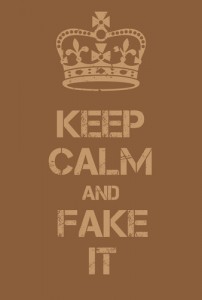 The years passed and my fears stayed with me. Then, I got married and had children. When I was holding my oldest son and freaking out about the latest storm, I realized I couldn’t do that any more. If he saw me reacting like that to bad weather, he would do the same and I didn’t want that for him. So, I had to start pretending that I wasn’t afraid. Thunder would literally rattle the windows of our little house and I would say things like “Oh! That was loud wasn’t it? But, it’s just a noise, it won’t hurt you.” Then, we would continue as if nothing had happened. And you know what? It worked. He wasn’t afraid of storms and neither was his brother. Well, my second son did develop a fear of storms around age twelve but that was the result of us being out and about when a horrible storm blew up and not because I taught him to be afraid. (And he was lucky, we lived in a house with a basement so he could go downstairs whenever he was afraid.)

However, my charade had a completely unexpected impact. After a couple of years of pretending I wasn’t afraid of storms I suddenly realized I really wasn’t afraid any more. Mind. Blown. It’s amazing the unexpected lessons we can learn on this journey called life.

This “fake it ’til you make it” mentality has helped me in other areas of my life, primarily when my anxieties flare up. When I get caught in one of those mental spirals where one fear is feeding on another, I try to remember what I learned from the storms and force myself to realize that those fears are just that, fears – they aren’t going to cause me any physical harm. Sometimes it still takes me a few days to break the cycle, but it has gotten easier over the years. Now, if I can only apply this methodology to my irrational fear of spiders…

Has the “fake it ’til you make it” mentality ever helped you?