We’re all familiar with the terms “morning person” and “night person”. I’m definitely a night person and my husband is a morning person. (He denies it but that doesn’t change the fact that he is, LOL.) Night is when I’m most likely to come up with a resolution to a story plot that has been bugging me or an entirely new story idea. Odds are good that if I can’t sleep it’s because my brain is running full steam ahead on a story. My husband is the opposite, early morning, usually during that time in-between awake and asleep is when his brain comes up with new projects or solves problems with existing ones. Not long ago he greeted me with the statement “I had the best idea this morning.” His eyes were big enough to be worthy of any cartoon character. Since I had just woken up, I wasn’t sure I was up to the level of excitement such a pronouncement should entail.

Before I tell you his idea, I need to explain a little about where we live. About 2.5 years ago we moved to our rustic dream home in the country; we call our house The Cabin. We both grew up in the country (most would say I grew up in the boonies) and after almost 30 years of living in town we were more than ready to return to our rural roots. Some rural residents set up boxes for use by delivery drivers; most of those residents live in areas far more rural than ours. However, since we have moved when deliveries arrive, there is no telling where they will be placed. On the deck? On the walkway? Under the carport? Left in the rain? Anything is possible. 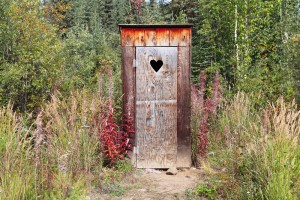 Yes, this kind of outhouse.

He was kind of crushed that I was not enthused at the idea of having an outhouse in our yard. Honestly, I’m not convinced that we need a delivery box at all – we’re not that rural. In some ways it might be nice so we don’t have to worry about things getting wet when packages are left in the rain but I’m not sure how we’d even let drivers know that there is a certain place to leave packages and I’m definitely not having an outhouse by the road.

What do you think of the outhouse idea? Do you have a special box or location for package deliveries?