Wow. I didn’t realize that it has been 5 months since I wrote a post for this blog. I’ve been blogging, I’ve just been focused on my “real life” blog, instead of this one. Oh, well.‍

If you were a fan of Bill Watterson’s Calvin and Hobbes comic strip you probably remember the veiled references to The Noodle Incident. Although the incident was never explained, my husband and I now have our own Noodle Incident. We recently hooked up our travel trailer and went on a twenty-eight day, 4,856 mile road trip. One night, hubby offered to give me a break and cook dinner. (Yay, hubby!) Most of our meals on the road are simple and this one was no different: spaghetti with homemade meat sauce. (We make our own spaghetti sauce from scratch using the Irish Italian spaghetti recipe I grew up with.) Hubby began the usual prep by putting water on to boil and beginning on the sauce. Everything was going to plan until he opened the box of noodles – and dumped them on the floor. Fortunately we had a second box, the contents of which made it safely into the pot. 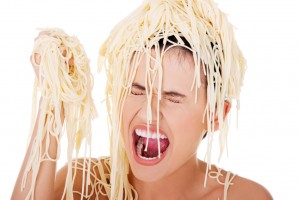 It wasn’t quite this bad.

Everything then proceeded according to plan until it was time to drain the noodles – and at least half of them wound up in the sink.‍ At this point I had to step in and say “Sir, I’m going to have to ask you to step away from the sink.” I then took over and finished the last of the meal while we still had something to eat, LOL. We had a good laugh and just enough noodles left to make a meal out of. I didn’t remember until after dinner that we actually had a collapsible colander that I had bought for just such a purpose. Oops.

Needless to say, the Noodle Incident is now a part of our family story. Now, I just need to find some sort of “noodle incident” Christmas gift for my hubby… Any suggestions?