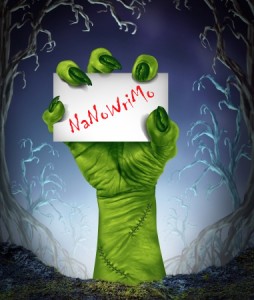 As you may or may not know, November is also National Novel Writing Month, or NaNoWriMo. As defined on the official web site, “National Novel Writing Month (NaNoWriMo) is a fun, seat-of-your-pants approach to creative writing. On November 1, participants begin working towards the goal of writing a 50,000-word novel by 11:59 PM on November 30.” It is a completely insane idea that is also completely doable.

This marks my fourth year of participating in the chaos that is NaNoWriMo, or third, depending on how you look at it. I “won” in 2011 and 2012, completing 50,000 plus words before the November 30th deadline. I signed up last year but didn’t participate; I was neck deep in the publication of Assassin’s Heart and decided that, for the sake of my sanity, something had to give. That something was NaNo.

I decided to give it a go again this year. After all, I finished the first draft of the first book in my paranormal romance series in October and needed to put it on the back burner for a while so that I can look at it with fresh eyes when I begin my revisions. NaNo would be the perfect opportunity for me to pound out a super rough draft of the second book in the series.

So far, it sounds like the NaNo experience is all unicorns farting rainbows doesn’t it? Alas, it is not. All these years I have harbored a deep, dark secret. I thought that I was the only one until I saw the following tweet from Derek L Reiner (@DerekReiner) on November 16th:

#NaNoWriMo turns me into someone I don’t like. I doubt I could write professionally as the deadlines would turn me into a monster.

I could have hugged the man. I am not alone! I can finally air my dirty little secret – NaNoWriMo turns me into a monster. There. I said it. For thirty days, my world revolves around reaching the 50k goal and heaven help those that get in my way. In order to write 50,000 words in thirty days, you must write an average of 1667 words per day. Life being what it is, I don’t get to write every day which means that I have to double up on other days. I find myself struggling to be nice to those around me. Heaven help my hubby if he invites me to go to a movie, or something else equally innocent.  He deserves better than the response he receives. I snarl at him, my newly grown NaNo fangs dripping venom: “A movie? Are you kidding me? It’s NaNoWriMo – I’ve got 2000 words to write! I don’t have time for a movie.” He slinks off to hide in another room while my claw-tipped paws return to tapping out words.

Okay, that may be a slight exaggeration, but only just. Most of the time in November I seem like a normal, friendly, middle-aged woman. Most of the time I manage to keep my sarcastic replies locked away inside. On the outside I say “A movie is a wonderful idea! What would you like to see?” while on the inside the NaNo monster howls and threatens to burst out of my chest and rampage through the Nostromo, sparing no lives. Wait, wrong monster. Any way, you get the idea.

During my previous NaNo attempts the words came easily; in 2012, I passed the 50k finish line on November 21st. This year has been a struggle and I don’t know why; the words have come much more slowly than ever before. To make matters even worse, November is when we celebrate Thanksgiving, the holiday that stresses me to no end. My birthday is also in November. This year, Dragon Age Inquisition, the video game that I have been waiting for forever releases and I want to play – a lot. So, all things considered, I have had far less success keeping the NaNo monster leashed this year. My Twitter friends have had the worst of it. Twitter is where I have vented most of my frustrations, where I have whined and where I have threatened to just throw in the towel and quit.

Quitting, in some ways, seems like the best option. If I quit, the monster goes away and I return to my normal, slightly less chaotic, life. However, I am an extremely competitive person so the idea of quitting doesn’t sit well with me. Add to this the fact that I am also an extremely poor loser and well – you see where I am coming from. For me, it would have been better not to start at all than to quit halfway into the month. Besides, this year’s winners tee shirts are totally awesome and I. Want. One.

Awesome shirts aside, I strongly suspect that this will be my last NaNoWriMo. Camp NaNo in April and July fit into my life much better and the flexible word count allows me to set a goal that will force me to push myself and yet not lose my life – and my soul – in the process.

Please tell me that Derek Reiner and I are not alone. Are there any other NaNoWriMo monsters out there?