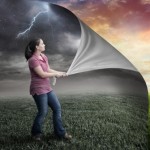 A few weeks ago, I wrote a post about stress, eldercare, and life as a member of the sandwich generation. Little did I know how timely that post would be. In the month since that post went live, my family has been put through the wringer eldercare-wise. My mother-in-law fell twice, the first time fracturing a rib, the second time fracturing two vertebrae in her back. The past few weeks have been filled with stress, much time at the hospital, and hard decisions.

The recent falls are just that – the most recent. Falls – and the associated trips to the hospital – have become a way of life over the past few months. Making things even more difficult is the fact that my mother-in-law is suffering from dementia. With each fall, her mental state seems to worsen; the latest falls seem to have sent it into a nose-dive.

Dementia is cruel, robbing people of their memories. In some ways, it robs people of the very thing that makes them who they are. However, after years of watching the degradation of my mother-in-law’s condition, I have become very aware that even in the storm of dementia, there are blessings. Let me explain.

My mother-in-law was a very hard woman, always on the lookout for a way in which someone could let her down. My personal favorite was being told that I have the “wrong” people in the background of the pictures I took at my kid’s birthday parties. (Insert eye roll here.) Gift giving occasions were a nightmare as we knew any gift would somehow fail to meet her standards. As dementia set in, my mother-in-law changed – for the better. She is now a sweet woman that is very easy to please. More than that, she is grateful for even the smallest things and thanks us frequently.

One of the biggest blessings came a year and a half ago when my oldest brother-in-law died from complications of heart surgery. Yes, my mother-in-law was hurt by her son’s death, as any mother would be. However, her grief was short-lived. Instead of living with crippling grief for months or years, her sorrow passed quickly as her dementia caused the memories of his death to fade as quickly as her memories of what she did the day before.

I said earlier that dementia is a cruel disease, and it is. However, I think it is hardest on those that are watching its depredations than it is on those that have it. We have to watch as someone we love becomes a shell of their former self, someone that wouldn’t even remember to eat if not reminded. However, except for a few brief moments of lucidity, my mother-in-law is unaware of what is happening to her. My mother-in-law hums all the time; whatever world she lives in, I think she is happy.

Oh, and the tattoo I mentioned in my earlier post? Ta da! 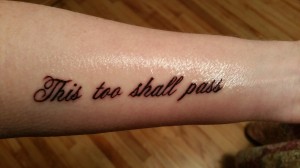 What blessings have you found in your storms?