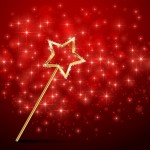 Do you believe in magic? I do. No, I don’t mean the Harry Potter sort of magic, although that would be completely awesome.

For me, it’s magic that transports me to other worlds and other lives in the pages of a book.  Thanks to J. R. R. Tolkien, I have traveled in the company of hobbits, dwarves, elves, and wizards. In the company of my fellow travelers, I have battled dragons, orcs, and unspeakable evil to save not only the world, but those that I love.

In the pages of Diana Gabaldon’s Outlander series, I have time-traveled through standing stones to the 1700s, fallen in love with a sexy, red-haired Scot, and been involved in political intrigue in Scotland, France, and the fledgling United States. (Whew, no wonder those books are so long!)

Thanks to Anne McCaffrey, I have soared on the wings of dragons and flamed Thread from the skies to keep it from ravaging my world. I sobbed bitter tears at the death of Master Robinton (even though it was his time) and ached with Brekke when shes screamed from her soul, “Don’t leave me alone!” Thanks to Ms. McCaffrey, I still want a dragon of my own!

Movies take my favorite stories to an even higher level. When I was a child, I was a dinosaur fanatic. More than anything, I wanted an island inhabited by dinosaurs. (Of course, I would be the only one allowed to see them.) Years later, Michael Crichton brought an amped up version of my dream to life in Jurassic Park. (Yes, dear readers, it was a book before it became a movie.) Steven Spielberg then brought the story to the big screen allowing movie-goers, myself included, to be hunted by velociraptors and chased by a T-Rex. This movie is easily in my top three favorite movies of all time. This is one of those movies that I will watch every time it comes on. I will cry every time the brachiosaurus stomps its way across the screen for the first time. (No, I’m not kidding.) And, for a couple of hours, I have my dinosaur-filled island.

But, the magic doesn’t end there. I know people that poo-poo video games because they are “just for kids.” Nothing could be further from the  truth! Video games are a platform that allows me to actually interact with the characters in each virtual world. In games, I have battles dragons, traveled to distant worlds, meet and romance aliens and assassins, and fought machines bent on exterminating all sentient life. (You can read more about my favorite virtual characters HERE and HERE.)

So yes, I absolutely believe in magic. And for me, magic always begins with a story.

Do you believe in magic?