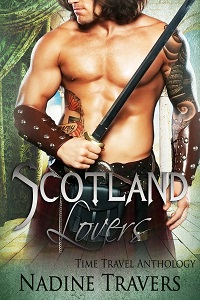 My friend Nadine Travers and I share a love of video games and writing romance novels. Today is a very special day for Nadine  – it is both her birthday and her very first book birthday. Her debut novel, Scotland Lovers, releases today! Read on for more details.

During a hiking session, Elizabeth is teleported through time. She is still in Scotland but it is now 400 years before her time. She wants to get back home. Will she be able to, though, or will she remain in the past forever? If she can’t get back, will she be able to adapt and find happiness in this period?

Duncan knows the mating pull. He knows that this beautiful stranger is the one for him. Will he be able to convince her to stay, or will he only make the situation worse?

This is the first of a five-part time-travel short story.

All he could see was her. Her red hair, loose on her shoulders, chest rising with heavy, ragged breaths. She was short, and he could see her muscle. With what she was wearing, he had a pretty good view of her body. Even though she was surrounded by dead bodies, this didn’t change the fact that he was completely enthralled by her.

The smell of morning grass mixed with blood and dead bodies and the songbirds in the forest, so deep and surrounded by big trees, assaulted his senses. She stood up straight and proud, dressed in clothes bloodied and torn from battle. He couldn’t be sure where she had come from, but everything about her suggested she was not from his time. Her clothes were all wrong.

He made a signal to his men to stop and wait for his command.

Are those trousers that she’s wearing? Damn, only men wear those!

Watching felt totally surreal. He couldn’t tear his eyes away from her. She was deadly but so beautiful at the same time.

Her hand tightened around the grip of the sword.  The sword branded in Red Coat colors. A clan of people he knew all too well.

By which trick could she have disarmed one?

She lowered the sword slightly, catching her breath, seeming to be somewhere else in her head. Her eyes latched on to him and his group. The instinct to kill, instead of be killed, reflected in her irises.  He made a move toward her.

In one second, her stance changed, sword angled toward him.

He tried to force the thoughts down and focus. He now understood that he would have to fight her. To make her understand. He made the signal to his men to gather around.

No way will she be able to flee.

She gripped the sword higher, challenging him. Him, the best warrior and future chief of his clan! He would make her change her mind about him. He did not want to hurt her, but he would if he had no other choice.

She let out a piercing war cry that echoed around them as she charged him. He was able to dodge her, but she quickly turned around and came at him again. The noise of steel against steel was strong as their swords met between them. He acknowledged her surprising strength, given her diminutive size.

She took advantage of his distractedness and punched him in the stomach.  It wasn’t enough to stop him from breathing, but enough for him to move more carefully around her and to take a step back in order to regroup.

Both swords met again. “Stop right now, lass!” he said with his deep Scottish accent. He tried to make her understand.

“Dream on!” she screamed at him.  Quicker than he could react, she jumped and kicked him in his face. He shook his head. That was strong. He loved strong and stubborn women.

Scotland Lovers is available for only $0.99 at the following fine etailers:

Nadine lives in Montreal area, Quebec, Canada with her husband, two children and two cats. Scotland Lovers is her debut in the self-publishing world. This first short story will be followed by four others to complete the anthology. Nadine is also working on a witch trilogy and mini-series with angels on Earth. In her spare time, Nadine loves to play video games.

You can find Nadine on the following sites. I hope you will stop by and wish her a happy birthday and maybe pick up a copy of Scotland Lovers for your summer reading!