My story, The Kitten in the Manger, is featured in the Finally Home anthology published by Bienvenue Press!

Home. Heart. Happiness. Finally Home brings you eight Christmas stories all about our four-legged friends and the special people who rescue them. From funny, to sad, to romantic, there’s something here to tug at everyone’s heart strings. A portion of the proceeds will be donated to various animal rescue groups. 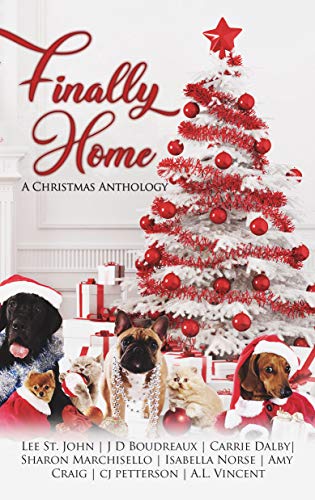 “Oh, Henry!” by J D Boudreaux
Make no BONES about it. Sometimes it takes a CAT-astrophe to make us PAWS and look at our lives. Enjoy this TAIL that will remind us that sometimes what we need to feel is the ANIMAL touch.

“Grace Shadowed” by Carrie Dalby
During a 1906 Christmas party, sparks fly between a doctor and a debutante, but igniting annoyance isn’t what Dr. John Woodslow had in mind when he asks Grace Anne to dance.Grace Anne Marley is left in charge of her younger sisters while their parents are out of town, and a stray dog is the last thing she wants to deal with when there are parties and masquerades on the horizon.

After the injured dog wags its way into her heart, can Grace swallow her pride and reach out to the young doctor for help?

“Smokey Finds a Home” by Sharon Marchisello
Cast aside for not meeting a Siamese cat breeder’s standards, Smokey was doomed to a short and meaningless life. But a Christmas miracle could bring him a place in a family after all.

“The Kitten in the Manger” by Isabella Norse
Holly Johnson has officially lost her mind. She, the self-proclaimed Queen of Social Awkwardness, has agreed to attend a Christmas party with Jeremy Barnes as their second date. Nothing short of a miracle can salvage this train wreck in the making. Fortunately, Christmas angels come in all shapes and sizes—some even look like kittens.

“A Rescue Before Christmas” by Amy Craig
First-year associate Kate agrees to dog-sit her mentor’s fox terriers, but falters when she finds a winsome stray dog at the end of his driveway. Torn between the dog’s sweet nature and her responsibilities to her mentor, she decides to take the animal to the shelter, but nothing goes according to plan.

When a tow truck driver rescues Kate and the dog from the side of the interstate, his laid-back charm prompts her to think about what she wants from life and what should happen next.

“Puppy Love” by cj petterson
Francesca DuBose is passionate about giving abandoned kittens a second chance at happiness. Her carefully curated life is disrupted when she becomes a foster hu-mom to a puppy with an amputated leg, and Cody Phillips, the man who broke heart, asks for a second chance, too.

“Saving Grace” by A.L. Vincent
Rescued in a New Orleans alley, Furby has been Grace’s comfort and constant companion. After he is injured, his fearless personality and determination encourages Grace to let go of the past and embrace the future.