My story, The Nerd in Shining Armor, is featured in the Nine Deadly Lives anthology published by Fire Star Press. Cats and books, a combination second only to – possibly – chocolate and peanut butter. 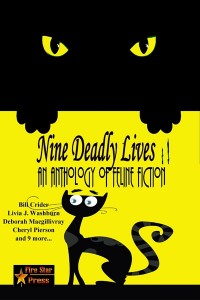 From magic to murder, from felines to faeries, the authors of NINE DEADLY LIVES spin thirteen tales featuring those sometimes aloof and occasionally dangerous but always adorable creatures we know and love as cats! Whether it’s mystery, fantasy, historical, or romance, these cat tales provide plenty of entertainment and thrills! In Livia J. Washburn’s SECOND NATURE, a Hollywood stuntwoman must solve an attempted murder case—on a cat! Can Dominique dare to hope she—the girl everyone shunned—could win the love of sexy Bran MacKenzie, the most popular guy in town? In Deborah Macgillivray’s SHOES, SHADES, AND FAERYDUST, it might happen! Lovey Villines’s cat, Mr. Fred, is the only witness to her possible murder. Brady Rowe, a veteran police officer, searches for a key that will open MR. FRED’S TREASURE BOX and possibly clear everything up. In Mollie Hunt’s CAT’S CRADLE, a cat lady discovers a stray kitten trapped in a gym bag. She finds herself pursued through Portland’s warehouse district by gun-wielding thugs. In Isabella Norse’s THE NERD IN SHINING ARMOR, working girl Abby needs a hero. Ryan, her neighbor, needs an assistant. Can a battle-scarred tabby with a penchant for quoting from Star Wars bring them together? Rochelle Spencer’s tale, THE CAT ON COOGAN’S BLUFF, involves a cranky detective who uncovers secrets about baseball, Harlem, and cats. In MISSING LYNX, Clay More pens a story that seems to never end. It is 1926, and the world mourns silent movie heart-throb Rudolph Valentino but Rudolph’s death is only the first in a series of tragedies in this supernatural feline murder mystery tale from the silent movie era. Mary Price has been given the impossible task of reading three romance novels in three days in C. A. Jamison’s story, DREAM WEAVER. A newly-adopted cat has her dreaming of a handsome blue-eyed stranger. In Mariah Lynne’s CLAWS FOR JUSTICE, two cats learn their time at the shelter is up. The furry duo finds a clever way to escape their fate, only to find their caretaker, Robby, dead. They now must make it their mission to find Robby’s killer. WHO LET THE CATS OUT? by Faye Rapoport DesPres–A mysterious fire tears through the main house of the Jane S. Dooley Cat Shelter. The shelter’s director, vows to keep the shelter open. She has two mysteries: Who set the fire, and who let the cats out? In Brandy Herr’s tale, after Larry’s wife walks out on him, the sudden arrival of a mysterious calico cat appears to be just what he needs to lift his spirits. But appearances can be deceiving. Will THE CALICO be a blessing… or a curse? Angela Crider Neary pens a supernatural story about an enchanting cat named ANGEL, a series of suspicious fires, and a Colorado sheriff who finds himself wondering if cats really do have nine lives—and trying to figure out who the next victim will be. Bill Crider’s THE EASTER CAT—When Hollywood private-eye Bill Ferrel gave a ride to the Easter Bunny, he thought he was just doing a friend a favor. How was he to know he’d wind up chasing a cat through the jungle and trying to prevent a murder?