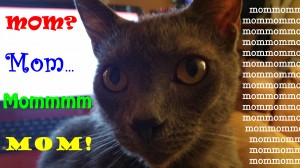 This is my scaredy-cat, Dez.

WARNING: While this post does not contain instances of potty mouth, mention of the actual bathroom occurs regularly. Those of you with delicate sensibilities that feel such rooms should not be discussed in polite company should read no further.

I’m a mom, so, with the birth of my first child I had to accept the fact that there was no longer anything even remotely privacy in my life. Modesty also takes a big hit during the pregnancy/childbirth phase, but that’s a topic for another post. Children have no respect for boundaries such as private time or closed doors. As a matter of fact, the mere sound of a closing door—be it bedroom, bathroom, or pantry—is sure to bring every child within hearing distance running. And, it’s not always just the kids. Our first house was less than one thousand square feet in size. Pretty much the only location that came with any expectation of privacy was the bathroom. However, with four people and only one bathroom, even that escape was limited. But, as soon as I managed to get away, no sooner would my fanny hit the seat than at least one child and my husband desperately needed to talk to me about something right then. These same people were nowhere to be seen before the closing of the door.

Not only did the sound of me closing a door mean that everyone would think of something that needed to be discussed, it was also the time that any injuries would occur. The incident I remember best was the day I left work, picked my kids up from school, and arrived home in dire need of the bathroom. I rushed inside, closed the door, sat, and began my business only to hear a crash in the living room followed by a blood-curdling scream. The scream was followed by the arrival of my oldest son on the other side of the door to inform me that my youngest son had fallen and hit his head on the coffee table. (Whenever my youngest son fell, it was pretty much guaranteed that he was going to land on his head/face. He once fell out of a swing backward and still managed to land on his face.) That was also the day I learned that yes, head wounds really do bleed profusely. My son had blood pouring down his face from a gash on his forehead. When I got him cleaned up, I discovered that the actual wound was less than a quarter of an inch in length. I’m convinced that had I not been in the bathroom, the injury wouldn’t have occurred. Not because I would have been there to stop the fall, but simply because I wouldn’t have been trying to pee.

However, I digress. I thought that as my kids grew up and left home, I would gain some sort of privacy. At least I would be able to go to the bathroom without interruption. Alas, it was only a pipe dream. My kids are gone, but I failed to take our cats into consideration in this equation. One of our cats lives to drink water out of the faucet in the bathroom sink—he runs to the bathroom anytime he even thinks we are going that direction, frequently running over us in the process. He will also just go in the bathroom and sit on the (closed) toilet and wait for one of us to show up and turn on the water. Yes, cats do indeed have staff.

On those rare occasions in which I am actually able to get in the bathroom without feline companionship, they are quick to let me know of their displeasure, usually by sitting just outside the door and yelling. A couple have perfected the art of sliding a paw under the door and trying to snag my toes which are conveniently locate within paw range. (We now live in a much larger house, but our “master” bathroom is roughly the size of a very small closet. But, at least it is no longer a pink ceramic tile nightmare.) Two of the cats have perfected their methods for letting us know “Hey, you forgot to let the cat in.” Loki, the one that likes to drink out of the faucet, will jump and kick the door. Nyx, the newest member of our feline family, has perfected the art of rattling the doorknob. Once again, there is no rest for the peeing. However, most of this takes place when I am the one in the bathroom. My hubby, except for rare instances, is left alone.

Oh, and the closing of the door has been replaced by the opening of the laptop. As soon as I sit down, open my laptop, and prepare to write, cats come from everywhere. They walk on the keyboard, lie on the keyboard, and just generally get in the way. My human kids don’t live at home anymore, so my furry kids have stepped up to fill in the gap.

Once a mom, always a mom. I can live with that.