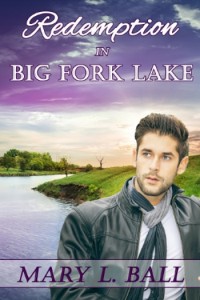 Today, I am thrilled to host Mary L. Ball, a fellow member of Clean Indie Reads. Mary is celebrating the release of her newest novel, Redemption in Big Fork Lake. Read on for all of the awesome details!

Can he be forgiven? Only after Robert Turner hurts a woman does he realize how much of a hold alcohol has on his life.

For Robert, a chance meeting with an Alcoholics Anonymous sponsor offers hope. A new devotion to the Lord and a relationship with Belle McBride gives him expectations for a better future.

His life appears to be on the right track, until he comes full circle with his past and faces the one mistake that haunts him daily. Can forgiveness-free Robert? Or will heartache drive him to return to the life he once had?

The calm waves of deep-blue glistened in the sunlight. Robert scanned the green vegetation that lined a big section of the lake. Lizard’s Tail plants outlined a walkway leading to a walking path. Snapping a photo, he captured the bright orange of a nearby Butterfly Weed. He shaded his eyes and looked up, scaling the length of several longleaf pines dominating the gravel roads, which led to various boat docks.

As Robert approached the landing, he caught a glimpse of a something—someone—that made him hold his breath a second. The natural beauty of the large lake was nothing compared to the woman standing maybe a few dozen feet before him. Something about her intrigued him in a way no other had.

Robert strolled onto the wooden L-shaped walkway and paused. He couldn’t stop himself from staring. Even from a distance, he could tell her beauty was natural. Robert noticed appealing women plenty, but for some reason this one tugged at his heart and made him realize how long it’d been since he enjoyed a relationship or even a date.

With his feet planted to the wooden deck, Robert watched as she gazed at the water. Like the small wave rippling in the lake, emotions rose inside him and feelings he’d covered up for so long bubbled to the top. No doubt, he was lonely for female companionship. It would be nice to go out occasionally with someone. I’ve concentrated so much on maintaining my sobriety that I’ve missed some of the good things in life.

Standing there, Robert pondered his life, activities he’d given up—dating topped the list. Now, the desire to start living again crept past his defenses. He wanted to enjoy the company of a woman, not just any woman, but the lady who stood before him with the cute ponytail.

Trying to divert his attention somewhere else succeeded for a few seconds—soon, however, his eyes darted back. Robert looked her over, guessing she was about his height and age. The wind kicked up, and blew her golden hair. The long strands waved in the breeze. Rays from the sun highlighted her blonde tresses.

While he stood there, Robert thought back to a conversation with his mother when he was in college. He wondered at the time if there was someone for him. She responded by giving him a hug and assuring him God would choose a special lady for him one day.

While Robert’s memory dug up those words, he hung his head in shame because of the times he ignored his parent’s advice. Why didn’t I find different friends instead of trying to fit in with the wrong crowd?

Robert mentally snapped back to the present and lifted his head. Recovering from alcoholism had taught him not to wallow in self-pity, but to move forward and redeem what he could. Returning to the sight of the beautiful woman, he tried to be discreet as he continued to observe her.

Mary L. Ball is a member of American Christian Fiction Writers. She lives in North Carolina and writes about real-life problems, blended with romance or mystery.

Her novels include, Escape to Big Fork Lake, Stone of Destiny, Postmarked Ever After, Christmas at Angel Ranch and Redemption in Big Fork Lake.  She is also a contributing author of 21 Stories of Faith.

When Mary is not working on her latest story, she enjoys fishing, reading, and singing with her husband at church functions.