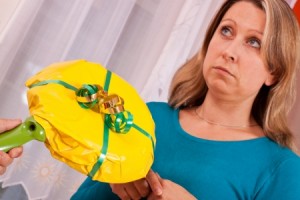 Yes guys, this is a bad idea.

There are all sorts of ideas in the world, ranging from life-changing to life-ending. The one that I am going to tell you about was not to either of those extremes but, it was on the “bad” side of the idea spectrum. I will go so far as to call it really bad. Perhaps I should tell you up front that this was not my idea, it was my husband’s. I was the one on the receiving end.

My husband owns a small lawn care business that he runs as a second job. When we get home from our day jobs, he changes clothes and heads out to mow lawns, trim bushes, etc., usually returning well after dark. One evening he came home, super excited about something—he practically bounced in the back door. “Have you got a minute? I want to show you something. I discovered the coolest thing tonight. Grab your headlamp and come outside.” What girl can resist an invitation like that? So, I donned my headlamp as requested and joined him outside.

My husband led me to the back yard with me peppering him with questions. The only response that I could get was “You’ll see. It’s so cool!” Once we got to the back yard he instructed me to shine my light on the ground, which I did. “Do you see anything shining?” I did not. From the frequency with which the question was directed at me, I knew it was important so I really tried to find , something, anything, shining. The best I could do was when the light would occasionally glint off of the mica in the sandy soil. That wasn’t what I was supposed to be seeing.

Once I had waded out into the middle of the yard, it hit me. I had a horrible, horrible thought. I stopped in my tracks and asked the question that I dreaded the answer to. “Does this have anything to do with spiders?” Just so you know, I DO NOT like spiders. A lot of people think of snakes, rats, and bats as scary but I’m fine with all of those. (Rats make awesome pets, by the way. Much better than hamsters. Just sayin’.) But spiders? No. Just no. Something about those eight legs and multiple eyes just completely creeps me out. I don’t even like to look at pictures of spiders.

My husband responded (far too cheerfully) “Yes! I found out tonight that when the light hits a spider’s eyes, they glow!” At this point there may or may not have been a few expletives issued on my part as I stomped back across the darkened yard, snarling “What were you thinking? You know I don’t like spiders! What made you think it was a good idea to bring me out into the dark to look for SPIDERS!” I was not a happy camper, to say the least. 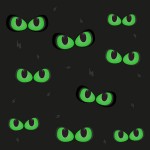 I still have no idea why my dear, sweet husband thought I was going to be excited by this discovery but, he honestly did. He even told the guys in his office about it the next day. To give them credit, they were all on my side with the unanimous reaction of “Dude, what were you thinking?”

When I originally planned this post, this is pretty much where it ended. However, last week we went over to my son and almost-daughter-in-law’s house to meet her father. Our visit ended with a round of backyard archery – after dark. Once again, headlamps were called into action. As I shone my light around the yard, I saw it – the eerie green glow of spider eyes. They. Were. Everywhere! My skin still crawls, just thinking about it. *shudder* To my credit, I didn’t run inside and lock the door. I stayed outside with everyone else and shot a bow for the first time since my college PE days. If that’s not love, I don’t know what is, LOL!

My hubby is extremely disappointed that he can’t find anyone else who thinks that glowing spider eyes are cool so, if you do, please let me know in the comments and I’ll pass it on!