My father passed away in February 2016 and my mother joined him in death in February 2017, one year and eight days later. My life has been filled with emotional ups, downs, and where-the-heck-did-that-come-froms over the past year and a half. (My grieving process began with my father’s fall three months before his death.) 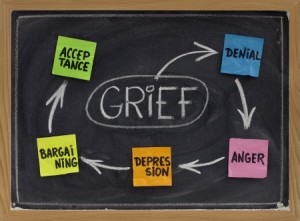 Science breaks the grieving process down into five steps: denial, anger, depression, bargaining, and acceptance. In reality, the process isn’t that clear cut. The steps don’t come in any particular order, and you may even skip some and repeat others.

In my case, there wasn’t much bargaining. Both of my parents were in their nineties and not interested in staying trapped in failing bodies. My mother moved two states away to live with my oldest sister and brother-in-law after my father’s death so the extent of my bargaining consisted of “Please God, let me be with my mother when she dies.” My prayers were answered and I was holding her hand when she passed away, but that’s a topic for another post.

Anger was similar. In late 2016 it became obvious that my mother wouldn’t be with us much longer. My initial reaction was anger. Why? I was just starting to get my feet back under me emotionally after my father’s death and I really didn’t want to go through that process again. But, it wasn’t about me so I had to rather quickly pull up my big girl panties and just deal with it.

However, through all of this, the emotions that have been the most surprising are the ones that have completely blindsided me. The first time this happened I had just picked up a prescription from the pharmacy. That’s it. I picked up my refill, got in my car, and cried all the way home. Seriously emotions? What’s up with that? My husband and I began using a locally owned mom-and-pop pharmacy shortly after we moved to this town. We knew the employees and they knew us. After we moved my parents to live across the street from us, they began using the same pharmacy. When my husband or I would stop by to pick up my parents’ prescriptions (of which there were many) the staff would always ask about them; they were genuinely interested in their health and well-being. Sadly, the main pharmacist and owner developed pancreatic cancer and died shortly before my father. After the pharmacist’s death, his family sold the business. The new owners repainted and removed all of the vintage decorations that previously graced the store. My tears were joined with sobs of “This isn’t my daddy’s pharmacy anymore” which didn’t make sense to me. It took my husband (who is far more perceptive than he thinks he is) to point out that what it meant was that there was no longer anyone at the pharmacy that remembered my father or could share my grief over his loss. It was a completely routine action that temporarily re-broke my heart.

The next incident involved my father’s walking stick. Daddy’s walking stick has been propped in the corner of my dining room since shortly after his death; I see it every day. The sight of it makes me smile. Admittedly, it’s usually a bittersweet smile, but it’s a smile nonetheless. A few weekends ago my grandson was visiting and he decided that he needed to bring me all of the walking-type sticks in the house – this including both of our hiking staffs and my daddy’s walking stick. No big deal, right? Wrong. I hugged my daddy’s walking stick and cried like a baby. Why? No idea. Like I said, I’ve seen it every day for over a year. Maybe it has something to do with the fact that I was touching it instead of just looking at it.

I will be adjusting to my new normal for the rest of my life. Emotions will continue to blindside me but hopefully the occurrences will lesson with time. For a long time, I had problems going to pick up my grandson – the route to his house is the same route that I drove countless times taking my parents to various doctor’s appointments. At first, by the time I got to my grandson’s house I would be fighting back tears. Now, I’m still filled with a sense of nostalgia, but I no longer cry. I call that progress.

What tips do you have to offer those who are grieving? Let me know in the comments!