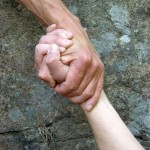 I see a lot of posts on various social media sites titled “Faith in Humanity Restored.” I enjoy theses posts and save many of them, they highlight the many good people and actions in our world. The thing that saddens me about these posts is that so many people seem to have truly lost faith in their fellow human beings. I have not.

I don’t think of my self as an optimist or a pessimist – I consider myself a realist. I realize that terrible events occur every day and that there are genuinely bad people in the world. I also believe that there are people whose actions go beyond “bad” and enter the realm of evil. Such people have always existed and always will. But, just as these people existed, so have those who have stood against them. But, for all of the people you read about, there were countless others you don’t – their actions were small, possibly impacting only a handful of people. In those instances, the world doesn’t remember their names, but you can be assured that that handful of people did.

We live in a day of information overload – news is accessible twenty-four hours a day via our televisions and the internet. If by some chance you manage to escape that bombardment a quick glance at Facebook, Twitter, or other social media sites will be more than enough to make up for it. I don’t understand why our media has decided that all news must be negative. It’s easy to get discouraged when we are constantly surrounded by negativity. But, how do you avoid it? Simple. Turn off the television. Put down your phone. Get out of the house. Take a walk. Not only does exercise release endorphins which cause feelings of well-being but walking exposes you to the real world surrounding you, not just the one you are told about.

Once out in the world, look for the good. It’s there. I saw it recently during a trip to pick up my grandson for a visit. On the return trip to my house, I came across the scene of a nasty single car accident. The accident was so recent that first responders weren’t yet on the scene. However, the occupants of the car weren’t alone. Several other drivers had pulled to the side of the road and rushed to their aid. Some people were on their phones calling for help while others comforted the injured and still others were running to their vehicles for bottles of water, etc. It did my heart good. None of these people were concerned about the color of the victims skin, or anything else – they saw fellow humans in need and responded. People are performing actions like this every day across the world in towns large and small.

I refuse to be a part of the negativity pervading our society. Not only do I write stories with a sense of humor and a happily-ever-after, I do what I can to share the actions of those doing their part to make their corner of the world a little better. How? On Pinterest I have a board named Life is Good where I pin posts about people making a difference. I’m also going to start using my Facebook page to do the same. In addition to my regular posts about my writing and other things important to me, I plan to make a daily post about someone – or something – positive. After all, the best way to to shatter the darkness is by shining a light.

Are you tired of the constant barrage of negativity? Then join me in shining the light of love and positivity. Don’t know where to start? My social media links are at the top of this page, check out my Life is Good board on Pinterest or follow me on Facebook for ideas. Together we can make a difference.