Yes, we are now in the thick of the holiday season and Christmas is my favorite holiday but that’s not what this post is about.

Here in the deep South, we don’t experience four seasons like a lot of y’all do, we only have two-ish. Spring/Summer is one, Fall/Winter is the other. I honestly don’t have a favorite season – there is something I enjoy about each of them. Well, except August. True, August isn’t actually a season but it should be. August is pretty much the worst month of the year. The heat is at it’s worst and the humidity is horrendous. We practically need gills to breathe. I live in an area where we have a steady influx of people from other areas of the country. Those poor souls who have spent their lives in the northern climes are completely unprepared for their first August here. More than one has asked, with a touch of fear in their voice, “Is it always like this?” The answer, sadly, is yes. I’m quick to tell them that you never get used to August in the South; I’ve lived here my whole life, I know. However, the gradual change to cooler weather begins in September and I begin to look toward to my favorite time of the year with increasing anticipation.

Now, I’m definitely not a fashionista but I do prefer my fall/winter wardrobe over that for the rest of the year. I think it’s a combination of the warm colors associated with fall and the soft warmth of sweaters. But, my favorite time of year is when the weather grows cool enough for me to break out my favorite article of clothing – my hooded sweatshirts, or hoodies, if you prefer. It’s not uncommon for me to jump the gun and decide to break them out a little too early. Just because it’s forty degrees in the morning, doesn’t mean it won’t be back up to seventy-five in the afternoon, at least not during the first few cool spells. That’s a bit warm for sweatshirt weather, even for a fan like me.

There’s just something about a hoodie – it’s big and baggy and warm. It’s kind of like a wearable hug. As soon as it gets cool enough, hoodies are my go-to clothing when I’m not at work. Just like my warm weather tees, I have a variety of hoodies that are all a reflection of me and my personality. I do have one that is… unique. It was purchased when my husband and I were vacationing in the mountains and an unexpected cold snap hit. We had not packed clothes for the temperatures that moved in so we went to a local outfitter where I purchased a hoodie. It wasn’t until we got to the trailhead where we were planning to hike and I donned the shirt that I realized it had an unusual feature. The pocket of the shirt contains a bungee cord and attached to it are a can cozy (or koozie) and a bottle opener. *facepalm* 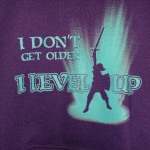 The perfect hoodie for a gamer!

This year a new second favorite cold weather article of clothing has joined my hoodies – flannel sleep pants. Such a simple pleasure that I have missed out on for so long. Due to my height, I can’t buy sleep pants in most stores and the only ones I have found online have been ridiculously expensive. (I’m not going to pay $50 or more for sleep pants.) Kudos to Old Navy for having flannel sleep pants at a reasonable price, even for us tall gals.

Now if you’ll excuse me, it’s nice and cold so it’s time for me to don a hoodie and sleep pants.

What is your favorite season? Do you have a favorite article of clothing?