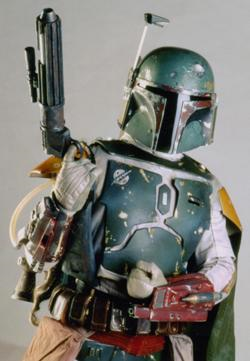 While others were swooning over Luke Skywalker and Han Solo, Boba Fett stole my heart. How could he not? I mean, look at the picture people. He is freakin’ cool! In “Episode VI: Return of the Jedi,” there is a scene in Jabba’s palace where Princess Leia, dressed as a bounty hunter, is negotiating the bounty for her “capture” of Chewbacca. During the course of discussions she pulls out – and activates – a thermal detonator. In the background, Boba Fett watches carefully, ready to take action if needed. Leia’s aggressive negotiation tactics please Jabba and all ends peacefully; Boba Fett gives the princess a nod. That’s all. One simple nod that says, “Well played.” For me, that nod, from that character, was – and still is – one of the sexiest things ever. To this day, whenever the movie is on I make it a point to watch that scene – just so I can grin foolishly and swoon quietly. My husband lurks in the background, watching me watch Boba Fett. (He laughed when he read this; he didn’t realize that I was on to him!)

I think that a big part of the infatuation is the aura of mystery projected by the character – you don’t see the man inside the armor; the only glimpses of him come through his voice and actions. I was actually very disappointed when Boba Fett was given a face in “Episode II: Attack of the Clones.” He will always be awesome, but I preferred it when he could look any way that I wanted him to.

The seed of my infatuation had been planted, but it fell dormant until I discovered video games – or rather, had gaming thrust upon me. (How I actually became a gamer is a topic for another post.) The first games that I played were first-person shooters, to be more specific, the Halo saga. For those of you not familiar with the games, the protagonist of the Halo trilogy is Master Chief Petty Officer John-117. John is known simply as the Master Chief, or Chief for short. The Chief, in my opinion, is drop-dead sexy. Once again, see the picture. Not only is he seven feet of gorgeous, but he is a man of few words; when the Chief does speak, he has a great gravelly voice and is a bit of a smart-ass. (A great voice and cocky attitude are both high on my list of desirable traits for my virtual crushes.)

Bungie LLC – the original creators of Halo – understood the mystique of the man inside the armor; they swore that the Chief would never be seen without his helmet/armor. I can only hope that 343 Industries, now the carriers of the Halo torch, keep this promise as well.

My more recent virtual crushes have changed slightly – they still have body armor, but you can actually see their faces. However, for brevity’s sake, I will save their “unmasking” for a later post. (You can read it HERE.)

Do you have any virtual crushes from movies or videos games? If so, please share in the comments. It will be our secret, I promise.