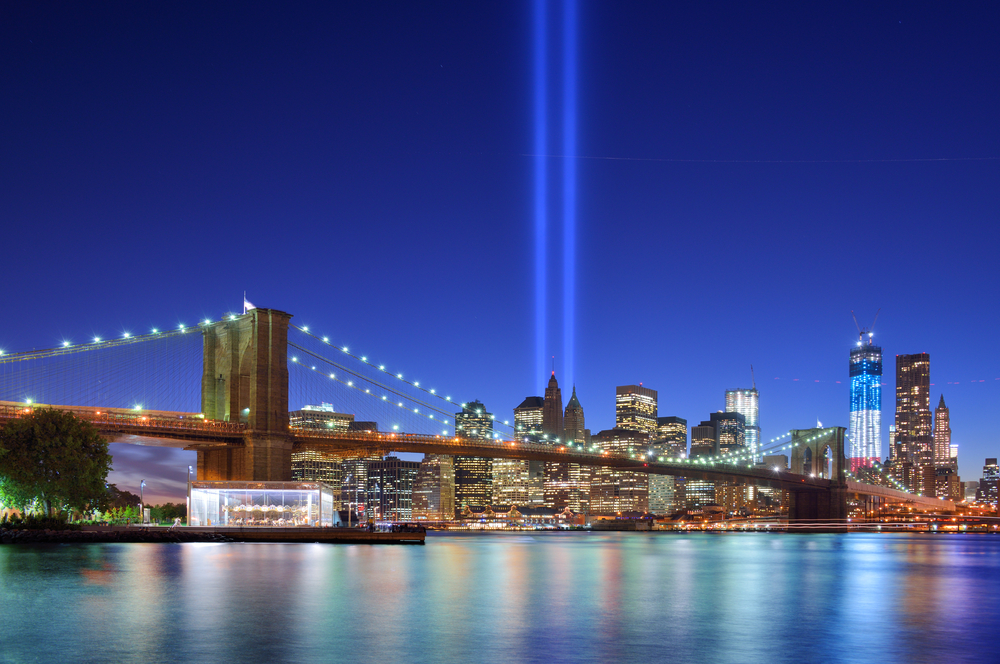 My husband and I were at work; our youngest son was at school while our oldest son was sick and had stayed home. The work day hadn’t even gotten started good before a coworker came into my office and asked if I’d heard that a plane had hit one of the twin towers. Not having any details, I just assumed he was talking about a small plane and small planes hitting skyscrapers is not unheard of so I kind of brushed off his fretting. (This particular coworker was known as the Town Crier for a reason; he was always going to be the first to hear, and blow out of proportion, any and everything.) It wasn’t until the second plane hit the second tower and I found out they were passenger planes that the reality of the situation hit me.  All I wanted to do was pick up my youngest son from school, go home, and gather my family around me where I could make sure they were safe. However, as a civilian employee on a military base, going home was not an option. All military installations had gone on full lock-down – no one entered and no one left. Needless to say, very little work got done that day. A couple of people in the building managed to scrounge up televisions and set them up; I made several trips by during the day to watch the horror unfold. Later in the afternoon the lock-down was eased enough to allow people to start going home even though our departure times had to be staggered to prevent the massive traffic jams that would result otherwise. My husband was in one of the first waves so he was able to pick up our youngest son in a timely fashion. I was in one of the last waves so I didn’t get to leave work until around 5:30 or 6pm. I was a wreck.

My mother called me during my drive home and asked how I was doing. I had managed to hold it together during the day but I told her that I was glad I could finally cry. I’ll always remember her answer – it baffled me then and it baffles me now. She said “Why would you want to cry?” I’m not sure I even answered because I couldn’t come up with the words. The world had just changed forever. Thousands of people were dead, many others injured. Why wouldn‘t I want to cry?

When I got home, I hugged my family and cried some more. Then, I sat down to watch the footage of the events of the day since I hadn’t been able to keep up with all of it at work. It was (and still is) heart-breaking. I remember watching footage of the first responders going up the stairs while everyone else was going down, not knowing that they were heading into, but doing it any way, willing to lay down their lives for others. But, one of the thing that hit me the hardest was watching footage of the shattered towers and wondering what was falling from them – only to realize that it was people. It still makes me cry. I can’t even begin to imagine what that must have been like – to be trapped on one of the upper floors with little to no hope of escape or rescue and have to make the choice of burning to death or jumping. How horrible.

I’ll spend the anniversary as I always do – watching the documentaries and remembering.