I am really excited about my short story, Virtually Yours. Even though the story won’t be released until late March, I’m revealing the cover now. Why? Well, if I don’t do something, I’m going to explode from suppressed excitement and you wouldn’t want that to happen, now would you?  :-)  So, without further ado… 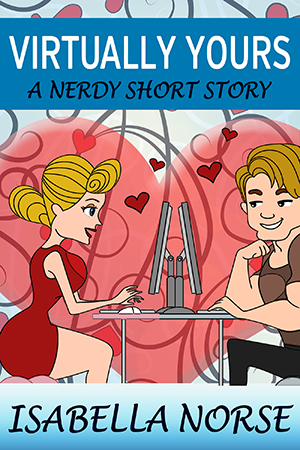 Isn’t it adorable?! This cover was created by Melody Simmons at Ebook Indie Covers, the same designer that created the beautiful cover for my debut novel, Assassin’s Heart. Once again, this is one of Melody’s pre-made covers; I found it in the Chick Lit section of her site. Even though my story is not chick lit, it is romance and the feel of this cover matches the humorous tone of my story perfectly. Somehow, Melody always seems to come out with the perfect cover for my next release!

Once again, I tweaked the characters in the story slightly to match the cover. Originally, Phoebe had brown eyes while Kyle’s were blue, but I swapped them to make hers blue and his brown. Did I have to? No. However, I have always been a firm believer that a cover should match the book in as much detail as possible. I have to admit that the change certainly made for interesting edits!

I’ll be posting regular updates on the status of the story on my Facebook page as I move toward publication; I hope that you will join me!

Phoebe Link, nerd extraordinaire, has several lovers – all virtual. The men in her favorite video games are cocky, witty, and self-assured. They are also safe – they will never cheat on her or break her heart. Of course, they will also never hold her close or warm her bed.

Kyle Shepard has been smitten with Phoebe for years, yet she remains oblivious to his hints that he would like to be more than friends. With subtlety getting him nowhere, he must channel his inner ladies’ man – surely all of those reruns of Space Trek have taught him something – and ask her out.

Can Kyle convince Phoebe to take a chance on love? Can Phoebe bring herself to risk her heart in a relationship with a living, breathing man? Or, will they both get more than they bargained for when they discover that the lines between fantasy and reality can blur when romancing a nerd?